Sequencing organize that data so it is more accessible in the notebook.

Location of the Sea pen videos:
http://eagle.fish.washington.edu/whale/index.php?dir=evocam%2Farchive%2Fseapen%2F
all videos are made up stills taken every 4 min.

Decided to take data from each hour point and note  if the animal was extended, unexteneded (buried), if it showed the wave like motion in its upper rachis that was observed when reviewing videos. and if the animal was visible or uprooted.

Muscle alignment : decided to run another type of alignment that I had used for previous work and noticed that my sequences lined up better with the initial sequence used to create the primers (shown in yellow). Red lines represent areas of the sequence that were trimmed. Consensus strand shows solid similarity up to ~200 bp then changes into sporadic similarity from ~250bp to ~400 and ~500-~600 bp. A28028 was the Renilla reniformis sequence used to create the primers shown with a yellow band bellow it (luciferase CDS)

Geneious sequencing: alignment done on June 29th that shows very little overlap. The Renilla reniformis sequence had no overlap with any of the sequences shown from ~200 to ~1200 bp all other sequences follow.

Detailed information for each of the individual sequences used in the alignment. Red indicates trimmed section and shades of blue show strength of accuracy for each base pair. Darker blue shows a higher percentage of accuracy. The name of the sequence used is to the left which can be referenced in the table above

Alignment of sequences: raw data of 11 sequences alligned excluding penF-010Luciferase_F which did not overlap with any of the other sequences shown below. 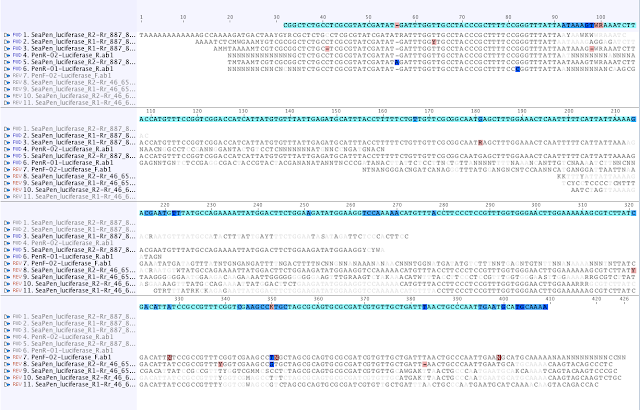 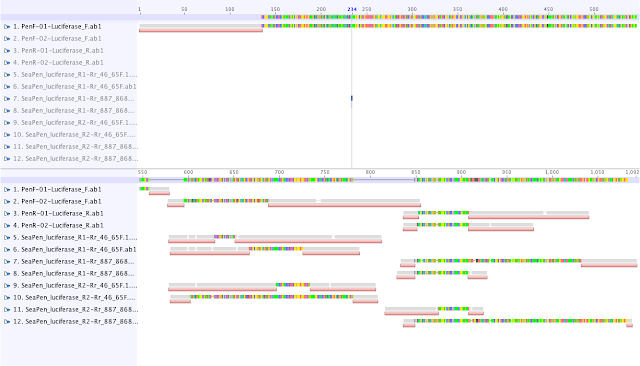