Purifing and a little movie magic

Take the product from July 22nd purify it using ULTRAFREE DA DNA extraction from agarose ref#42600. After purification test samples in the nanodrop to check quantities of DNA.

Start reviewing the videos and collecting data from one of the sea pens. watch every 7th video recording behavior hourly on excel spreadsheet created on July 13th. behavior noted: if the animal was extended, unexteneded, if a peristaltic like wave motion was visible, if the animal was visible and of the animal had uprooted itself. The videos cover from 08/14/2014 to 01/24/2015. I used quicktime to view the videos since it allowed me to scroll in easily through the videos.

Results:
Sequencing
The purification was successful but the nanodrop recorded low amount of DNA (show below). I am not sure if the samples will be able to be sent out for sequencing but I will talk to Sam to verify 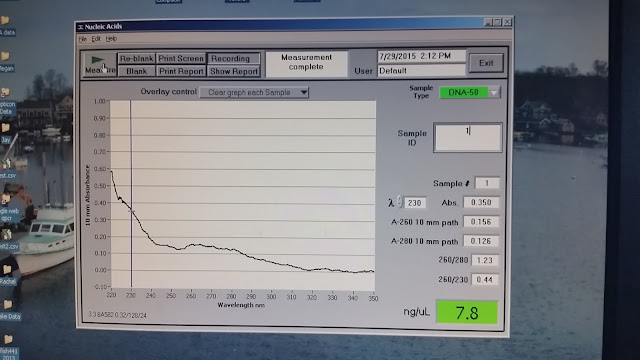 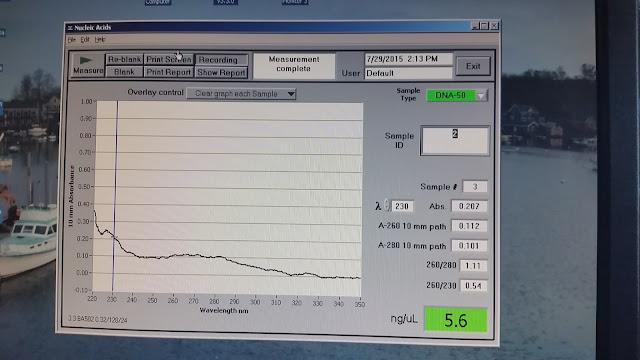 Behavioral
I was able to collect data for 21 days focusing on one of the sea pens. the first to days (time-lapse 1 and 7a) I focused on the sea pen that was positioned in the front right bucket, in video 7b the arrangement was changed and I followed to animal in the front center. I was watched video 1,7,14,21,28,35,42,49,56,63,70,77,85,92,99,106,113,120,127 though after 99 the videos became very dark making it very difficult to make out animals often only able to get 1 data point. Later on in the experiment I did reduce the lighting which seemed to increase animal activity though made it to difficult to obtain video data. 14 of the videos did give usable data. Viewing the videos took about 2 hours though the final videos were quicker since I could not see much. If I continue viewing them on a regular basis I should get faster and may be able to increase the animals that I am recording but I will speak with Dr. Roberts on Friday to verify how he wants me to proceed.
Posted by Unknown at 8:21 PM